Germany Is Arguing With Itself Over Ukraine 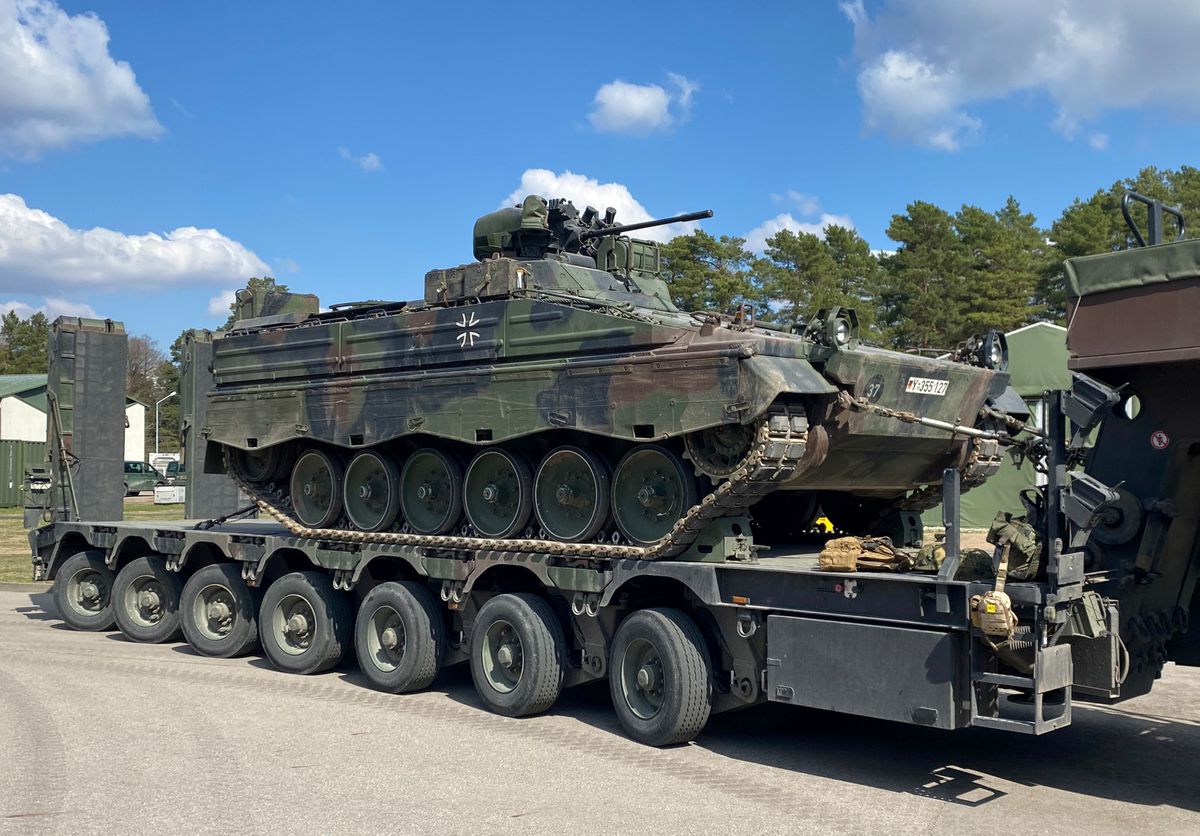 The fight over which weapons to give Ukraine is really a disagreement about Germany. Last February, three days after Russia invaded Ukraine, Chancellor Olaf Scholz stood up in the Bundestag, Germany’s parliament, and made a remarkable speech. Scholz, a Social Democrat without much of a track record on military issues, told his country—conditioned since the 1990s to believe that it no longer needed a real army—that he would add 100 billion euros to the defense budget this year. Germany, he said, needed “airplanes that fly, ships that can set out to sea and soldiers who are optimally equipped for their missions.” He declared that decades of increasing dependence on Russian energy would cease and that Germany would begin preparing alternatives. And after weeks of refusing to send weapons to Ukraine, he declared that Germany would now be sending anti-tank weapons and Stinger missiles.

Scholz called this a Zeitenwende, or historical turning point, and not everybody was ready for it. Marie-Agnes Strack-Zimmermann, the chair of the Bundestag’s Defense Committee (and a Free Democrat, part of the government coalition) watched the faces of politicians from Scholz’s own party. She could see that many were stunned. Still, she thought that the “turning point” would begin right away. Instead, she told me, it was as if Scholz “said these big words and then had to sit down and rest.”

And this is where we are now: Ever since the speech, Germans have been arguing over what helping Ukraine really means, which weapons can be sent and which cannot, which might provoke some kind of extreme reaction from Russia and which might help win the war. Even as more and more German weapons have flowed to Ukraine, the argument about them remains far more contentious in Germany than anywhere else. It’s hard to imagine a major American talk show spending an hour talking about whether or not to send tanks to Ukraine, but one German talk show recently did (I know, because I was on it). Opposition politicians have been loudly critical of the government on this as many other things, but Strack-Zimmermann and other politicians within the ruling coalition have criticized the pace and nature of the assistance too. Anton Hofreiter, a Bundestag member from the Green Party, which is also in the coalition, told me that heavy-weapons deliveries only happened because so many people “pushed and pushed” for them. I had a glimpse of the emotion in these arguments during a series of meetings in Berlin last week, in which I watched people throw questions at Wolfgang Schmidt, Scholz’s chief of staff. More than once, he was asked about tanks.

Some background: Germany has tanks that it could offer to Ukraine, but it doesn’t. The German government has prevented other European countries that own German-made tanks from sending theirs as well. Yet Germany has sent many other heavy weapons, including some that look like tanks (the anti-aircraft Flakpanzer Gepard has gun barrels and the heavy metal treads that most people associate with tanks, and is already in Ukraine). Thanks to these deliveries, as well as other air-defense systems that were knocking missiles out of the sky over Kyiv this week, Germany has become the third-largest supplier of weapons to Ukraine, after the U.S. and the U.K. Meanwhile, Poland and other countries have given Ukraine Soviet-style tanks that they had in their stocks (and Ukraine has picked up quite a few more of these, left behind by the Russian army). Large, modern, Western “main battle tanks” that can be used to attack Russian forces could give Ukraine an advantage. But none are on the way. Quite a few Germans think this refusal is a form of dithering or hair-splitting, and when they talk about it, they get angry quite quickly.

So why not send tanks? During a panel that we shared, Schmidt gave a series of explanations. Some had to do with logistics: Tanks, he noted, require long supply chains and repair systems, and these would take a long time to set up. Some had to do with optics: “If tanks were captured with the German Iron Cross,” he said, “it would be the perfect occasion for Russian propaganda to say, look, this is NATO attacking us.”

But logistics can be fixed. The optics, at this point, are hardly a concern. Putin knows which side the German government is on, and anyway German tanks sent to Ukraine would be painted with the Ukrainian flag, not German insignia. In truth, the clinching argument is political. As Schmidt said, “nobody else is delivering” modern tanks—not the French and most significantly not the Americans. And the Germans, or at least Scholz and Schmidt, are waiting for someone else, especially the U.S., to go first.

Again, why? Germany could create a consortium of all the countries that own German tanks—among them Poland, the Netherlands, Finland, Spain, Greece —and deliver them jointly, a move that would help solve the logistical problem too, since more tanks and trainers would be involved. A group of Green and Liberal Democratic politicians this week issued a statement calling for exactly that, a “coordinated action among our partners and allies. Let’s move forward together!” But no Social Democrats appear likely to join them until the chancellor decides to act. And for the moment Scholz isn’t moving because this isn’t really an argument about tanks; it’s an argument about Germany. And that argument is not yet resolved.

The clue is in the statement’s historical reference: “As a country responsible for the worst human rights crimes in Europe—especially in Poland and the countries of the former Soviet Union—we have a special obligation to restore and secure peace” and to prevent human-rights violations. This group of Green and Liberal Democratic politicians is arguing, in other words, that the lessons of German history compel Germany to prevent another genocide in Europe, even if that means a military engagement. They and others feel this strongly and say it often.

But for the past three-quarters of a century, and especially in the three decades since the end of the Soviet Union and the reunification of their country, many other Germans have drawn exactly the opposite lesson from history. The lesson of 1945, as broadly understood until now, was that Germany should prevent war at all costs by refusing to engage in one, no matter what the stakes, especially in Europe. The lesson of 1989 was often understood in exactly the same way. If Americans think the Cold War was won because of nuclear weapons, the decades-long presence of American troops in Europe, and Ronald Reagan’s push to increase that commitment, many Germans, especially in Scholz’s Social Democratic Party, think that compromise and trade—most notably the construction of mutually beneficial pipelines to Russian gas deposits—ended the conflict.

The interests of business, especially the big German companies that invested in the pipelines, play a role here too. Talk to a German industrialist or an economist, and you can often hear real angst: When will the war be over? When will we get back to normal? Alongside zero military engagement, the old lesson of German history also implied a green light for doing business with Russia, turning a blind eye to the growing evidence of Russian aggression, and assuming that a high level of economic interaction would sooner or later make Russians more friendly too. The mantra Wandel durch Handel—“change through trade”—gained traction both because it sounded nice and because it was so profitable. While Strack-Zimmermann and Hofreiter are among the many Germans who have accepted the collapse of this paradigm, not everybody else has. The specter of a similar break with China, which buys billions of euros worth of cars and machinery from Germany every year, now looms very large indeed.  Each new weapon sent to Ukraine is more evidence that normal isn’t coming back anytime soon.

Fear plays a role too. Perhaps because the memory of burnt-out cities is still alive in Germany, German media have played up the danger of Russia’s nuclear arsenal ever since the war began. Claudia Major, a defense analyst at the German Institute for International and Security Affairs, told me that her team had compiled a 100-page-long list of nuclear threats to Germany from Russian public officials and state propagandists, speaking either on Russian television or to the media. These scare tactics work. The calls for some kind of deal—for a forced settlement of the war—are just as loud in Germany, especially on the far right and the far left, as they are in similar pro-Russian political circles in America.

Of course, this message very much suits the Russians who want to make the occupation of eastern Ukraine permanent—a fait accompli that would allow them to regroup, rearm, create a massive refugee crisis in Europe, and then attack the rest of Ukraine in a few years time. A temporary cease-fire would empower Russian President Vladimir Putin, who could claim victory now and continue the war later. Germany would not be safer, but more endangered, as the borders of an aggressive, emboldened Russia moved farther West. Even though some in Germany’s political center logically understand this, many are still scared—which is why every category of weapons becomes the focus of a new debate, and perhaps part of why the chancellor doesn’t want to be the first to use any of them. Will the transfer of airplanes trigger the use of tactical nuclear weapons in Ukraine or maybe even the bombing of German cities? Long-range artillery? Tanks?

But the rancor of the debate itself reflects the deep changes that have already taken place. Of all the Western democracies, Germany made the biggest bet on Russian trade and Russian gas, as well as the biggest bet on Putin’s rationality. Germany is now paying the largest economic price for the war too. Support for the Ukrainian military defense nevertheless remains very strong. In a September poll, 70 percent of Germans surveyed still said they want to help Ukraine win even if it means higher energy prices.

Scholz himself recently spoke about the Russian “crusade” against liberal democracy, acknowledging that Putin is committed to the destruction of the world in which Germany formerly existed and prospered. Schmidt likes to say that the vigor of the argument about tanks and other weapons in Germany reflects the fact that Germans are not used to leadership, that they are still “in our teenage years,” no longer followers but not quite ready to lead.

He is clearly right, though I would put it differently: In truth, some Germans are ready to lead, some Germans have re-learned the lessons of history, and some Germans are beginning to convince their compatriots that the world has changed, and that they have to change along with it. They haven’t quite won that argument yet. When they finally do, Europe will be ready to defend itself, Russia will no longer be able to count on the advocates of appeasement, and the Zeitenwende will finally become real.