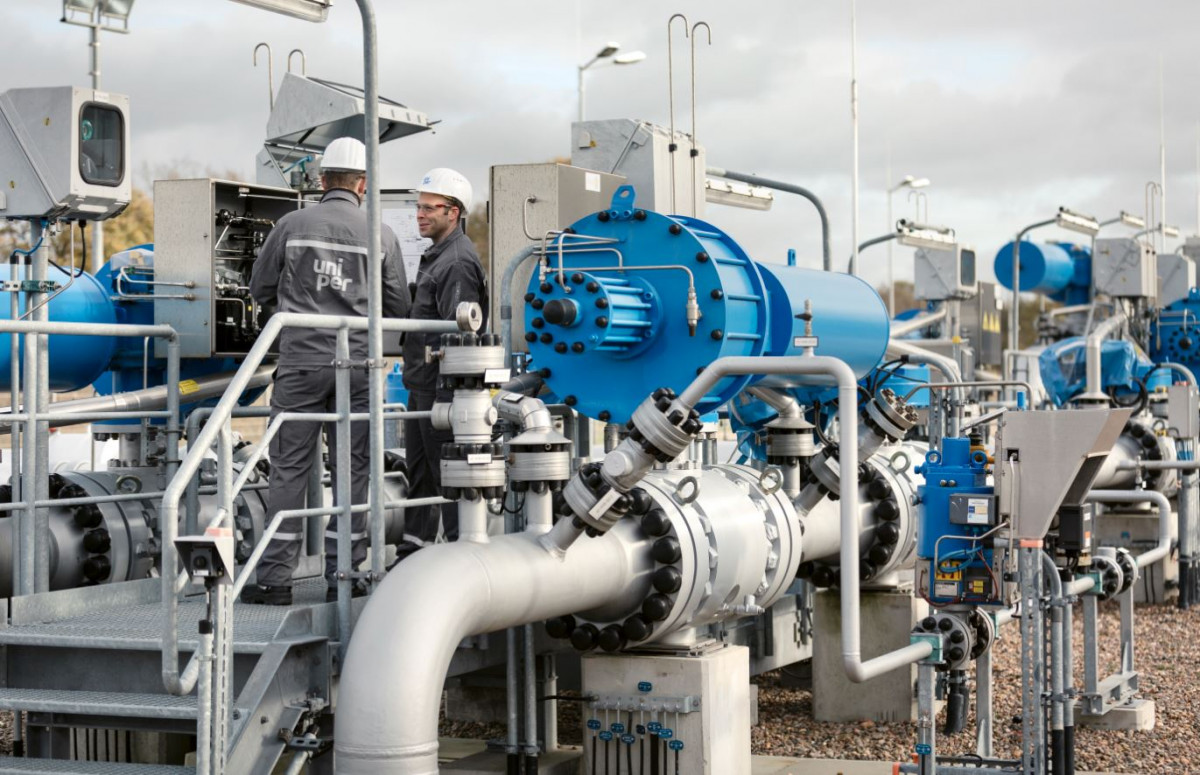 „Russia has turned the entire Donetsk region into a dangerous hotspot for civilians as well,“ Kyrylenko said on Telegram. „I call on everyone to evacuate! Evacuation saves lives!“

At least seven civilians have been killed in Russian shelling in the area over the past day.

Donetsk is the last remaining eastern province of Ukraine, partially under Kyiv’s control.

Scholz says Germany must speed up energy transition due to war

Germany must implement the transition to green energy faster because of Russia’s invasion of Ukraine, Chancellor Olaf Scholz said.

Speaking at an event hosted by the Renewable Energy Association Scholz said Russia was using oil and gas exports as a political weapon.

„That’s why we now have to turbo charge the expansion of renewable energy,“ he said.

„An all-Russian movement of children and adolescents is being created,“ parliament’s lower house, the State Duma, said in a statement, adding that its members will themselves pick a name for it.

President Vladimir Putin will be asked to head the supervisory board of the movement.

In the USSR, children were taught Soviet values through the Little Octobrists, Young Pioneers, and the Komsomol.

The new organization will be open to all children from the age of six and will be financed by the state.

In a post on Twitter, it said the claims were „fake“ and that it was using the HIMARS to inflict „devastating blows“ on Russian forces.

Earlier the Russian defense ministry said it hit the HIMARS during an air strike in the Donetsk region. The ministry released video footage that it said showed the strike.

HIMARS can carry and fire up to six medium-range rockets or can carry one long-range missile.

Ukraine had received only four HIMARS systems as of early July, the European Council on Foreign Relations said in a report. The US has pledged to deliver eight by mid-July.

The Ukrainian military has lifted a restriction on conscripts that required them to obtain permission if they wanted to leave their registered place of residence.

The order was rescinded a day after it was announced, following widespread criticism that also saw President Volodymyr Zelenskyy speak out against the measure.

Under the regulation, men aged between 18 and 60 would have needed permission from their local military enlistment office to leave the district where they are registered. Many Ukrainians don’t live in their place of registration.

Zelenskyy said that this decision had caused „incomprehension“ and „outrage“ in Ukrainian society and promised that he would „figure it out.“

German Chancellor Olaf Scholz has announced the imminent delivery of more weapons to eastern European allies, who will, in turn, send arms to Ukraine.

The government had „now concretized these agreements with several states to the extent that they will be directly linked to shipments,“ he said during questioning in the German parliament.

As part of the deal, Eastern European partners would send easy-to-operate Soviet-era weapons to Ukraine and receive arms deliveries to replenish their stocks.

„We have invested a lot of energy for this to actually happen,“ Scholz said, adding the deliveries would take place in the coming weeks.

Establishing and maintaining „confidential“ cooperation with a foreigner or international organization and helping them act against Russia’s interests will be punishable by up to eight years in prison.

Public calls to act against Russia’s security will be punished by up to seven years in prison.

„The changes are an adequate and timely response to the challenges that our country is currently facing,“ senior lawmaker Vasily Piskarev said.

They are part of an ongoing crackdown on dissent since President Vladimir Putin sent troops into Ukraine.

Russian businesses will be forced to supply goods and services necessary for the war to the armed forces, and employees at some firms will have to work overtime to produce them, according to two bills approved by the country’s parliament.

The bills will allow the government to introduce „special economic measures“ during what the Kremlin calls a „special military operation“ in Ukraine.

„In the context of operations carried out by the armed forces of the Russian Federation outside of Russia, including on the territory of Ukraine, there is a need to repair weapons, military equipment and provide the armed forces with material and technical means,“ an explanatory note to one of the bills stated.

The bills were rushed through parliament, and President Vladimir Putin was expected to sign them into law.

Germany won’t allow Russia to use G20 as a platform

German Foreign Minister Annalena Baerbock said Russia should not be allowed to use this week’s G20 minister meeting as a platform given its war in Ukraine.

„It is in the interest of us all to ensure that international law is respected and adhered to. That is the common denominator,“ Baerbock said in a statement.

„It is also the reason why we will not simply stand aside and allow Russia to use the meeting as a platform,“ she added.

Speaking in Vietnam, Lavrov said he did not know of any attempts to block his participation. „If such attempts were made, the Indonesian government did not react to them,“ he said.

US Secretary of State Antony Blinken has already declined a meeting with Lavrov, and numerous others have criticized his participation.

Lavrov’s participation in the meeting is regarded as a test ahead of the leaders‘ summit later this year.

Several G7 countries have threatened to withdraw from the G20 summit if President Vladimir Putin attends.

The momentum of financial commitments to Ukraine is „slowing,“ according to the Kiel Institute for the World Economy, an independent economic research institute based in northern Germany that is tallying global military and other aid to Ukraine.

„In the period covered in the latest Ukraine Support Tracker release (June 8 to July 1), only few new pledges were added, and they were less substantial,“ the institute said in its latest update on Wednesday.

According to the data, the largest single new commitment in military assistance came from the United Kingdom, a pledge of €1.5 billion ($1.54 billion).

Estonia, Latvia and Poland lead the way in terms of total assistance — military, financial and humanitarian — in relation to their share of relative wealth.

The total aid offered by the United States  — almost €42.61 billion — is roughly the same as all other countries combined.

Germany is the third-largest donor country — with €3.34 billion — overall, after the US and the UK, albeit with the EU the second largest contributor if also including transnational institutions.

But both Germany and the US have pledged far more than they have so far delivered.

Sloviansk to be ’next key contest‘ in Donbas: UK

The UK’s Ministry of Defense said in its Wednesday intelligence update that „there is a realistic possibility that the battle for Sloviansk will be the next key contest in the struggle for the Donbas.“

It said that Russian forces were likely continuing to consolidate their control over the Luhansk oblast and the recently overrun Lysychansk, but that forces from Russia’s eastern, western, central and southern forces all now appeared to be converging on the town of Sloviansk in the neighboring Donetsk oblast. The Eastern and Western Groups of Forces „are likely now around 16 km (roughly 10 miles) from the town,“ it said.

The mayor of Sloviansk on Tuesday told citizens to take shelter, saying the city faced „massive shelling.“ Meanwhile, Ukraine’s governor for the contested Donetsk region said his „main advice“ to noncombatant civilians was to evacuate.

„The enemy is shelling chaotically, the attacks are aimed at destroying the local population,“ Pavlo Kyrylenko said. „So, once again, the main advice is to evacuate.“

A Left Party lawmaker in Germany has called for an end to Russian sanctions against the gas supply and to start talks on the Nord Stream 2 pipeline.

„The government must ensure that energy prices are kept in check by increasing supply, including from Russia,“ the party’s economic expert, Klaus Ernst, told the daily Rheinische Post on Wednesday.

„Our citizens and our economy are the suffering the consequences of a completely misguided sanctions policy,“ he said, adding that disrupting the gas supply could „irreparably damage the industrial backbone“ of Germany.

„The German government must do everything it can now to secure energy supplies,“ he said. „If necessary, also putting Nord Stream 2 into operation for a limited period of time, if the gas supply cannot be can be guaranteed in any other way.“

Germany’s Left Party is effectively the successor to the former East German communist SED and tends to maintain better ties to Russia than any other political groupings in the country.

The party has been struggling in state elections this year following the outbreak of the war in Ukraine. It failed to secure parliamentary representation in the most populous state of North Rhine-Westphalia entirely in May, securing just 2.1% of the vote, having claimed 4.9% last time around in 2017.

Army Commander-in-Chief Valeriy Zaluzhnyi and Ukraine’s general staff had said that Ukrainians eligible for military service needed permission if they wanted to leave their registered place of residence.

Following outrage on social media, authorities specified that such permits were indeed necessary for leaving a district.

In Ukraine, districts are a mid-sized administrative division that are below that of a province and above that of a municipality.

Zelenskyy said that this decision had caused „incomprehension“ and „outrage“ in Ukrainian society, and promised that he would „figure it out“ in an upcoming meeting with the country’s military leadership.

„I promise the people to clarify the matter and further request the general staff not to take such decisions without me,“ Zelenskyy said.

Ukrainian men between the ages of 18 and 60 have not been allowed to leave the country since the imposition of martial law as they are classed as being eligible for military service.

Starting in October, women in certain occupational groups will also be subject to military service.

US does not expect Blinken-Lavrov meeting at G20

US State Department spokesperson Ned Price said that he does not expect US Secretary of State Antony Blinken to meet with Russian Foreign Minister Sergey Lavrov at the G20 meeting in Bali, Indonesia.

„I’m not in a position to walk through the choreography, but I certainly would not expect any meeting between Secretary Blinken and Foreign Minister Lavrov,“ he said.

Price said that he expected G20 members to condemn Russia’s invasion of Ukraine.

Pavlo Kyrylenko, the governor of Donetsk region in eastern Ukraine, urged the evacuation of 350,000 residents. Kyrylenko said two were killed and seven more were injured during heavy shelling on the city of Sloviansk.

Vadim Lyakh, the mayor of Sloviansk, urged residents of his city to take shelter as his city faced „massive shelling.“

The UN High Commissioner for Human Rights, Michelle Bachelet, said that hundreds of civilians have been detained in parts of Ukraine held by Russian forces.

Polish citizens were crowdfunding for the purchase of drones for Ukraine following a similar successful initiative in neighboring Lithuania.

The UN’s Food and Agriculture Organization (FAO) announced a donation of $17 million (€16.5 million) to address the problem of grain storage in Ukraine and to increase exports.

Representatives of over 40 countries along with multilateral organizations such as the European Investment Bank and the Organization for Economic Cooperation and Development (OECD) signed onto the Lugano Declaration outlining a roadmap for Ukraine’s recovery.