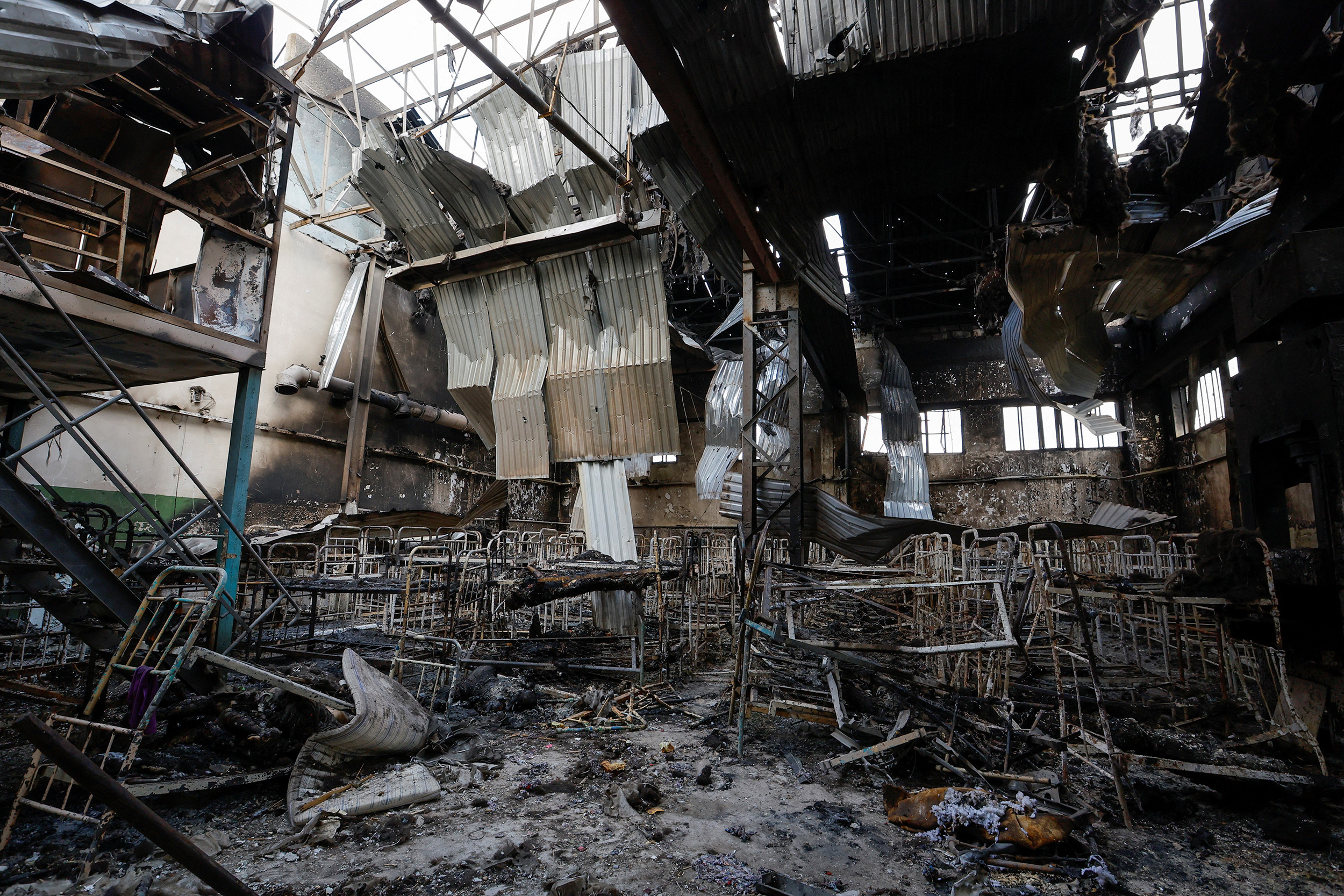 Dozens of Ukrainian prisoners of war appeared to have been killed when a prison building was destroyed in a missile strike or explosion, with Moscow and Kyiv accusing each other of responsibility on Friday.

The deaths, some of which were confirmed by Reuters journalists at the prison where the men were held in eastern Donetsk province, overshadowed a U.N.-brokered deal to restart shipping grain from Ukraine and ease a worldwide food crisis.

The deal was discussed by the top diplomats of the United States and Russia on Friday in their first phone call since before Russia’s invasion of its neighbour began on Feb. 24.

Russian Foreign Minister Sergei Lavrov told U.S. Secretary of State Antony Blinken that Washington was not living up to promises regarding the exemption of food from sanctions, the foreign ministry said. For his part Blinken said he told Lavrov the world expected Russia to fulfil its commitments under the grains agreement between Ukraine and Russia. read more

Forty prisoners were killed and 75 wounded at the prison in the frontline town of Olenivka held by Moscow-backed separatists, Russia’s defence ministry said.

A spokesman for the separatists put the death toll at 53 and accused Kyiv of targeting the prison with U.S.-made HIMARS rockets.

Ukraine’s armed forces denied responsibility, saying Russian artillery had targeted the prison to hide the mistreatment of those held there. Foreign Minister Dmytro Kuleba said Russia had committed a war crime and called for international condemnation.

Reuters TV showed the remains of a cavernous burned-out building filled with metal beds, some with charred bodies lying on them while other bodies were lined up on military stretchers or on the ground outside.

The Russian defence ministry said the prison housed Ukrainian POWs and that eight prison staff were also wounded. Russian-backed separatist leader Denis Pushilin was quoted as saying there were no foreigners among the 193 detainees.

Ukraine’s security agencies demanded the United Nations and Red Cross immediately react to the deaths of prisoners of war in a Russian-held jail. They said the two organisations had given guarantees the detainees would be well treated and should send investigators to the prison.

The International Committee of the Red Cross (ICRC) is seeking access to the site and has offered to help evacuate the wounded, ICRC said in a statement on Friday.

Ukraine has accused Russia of atrocities and brutality against civilians since its invasion and said it has identified more than 10,000 possible war crimes. Russia denies targeting civilians.

Ukraine’s SBU domestic security agency said it had intercepted telephone calls by Russia-backed separatists which suggested Russian troops had caused an explosion at the prison. Ukrainian military intelligence said there was an explosion in a new building meant to house prisoners from the besieged Azovstal steel works in Mariupol.

It said the building was blown up by mercenaries from Russian private military company Wagner Group and was not coordinated with the Russian Defence Ministry.

Hundreds of civilians and badly wounded Ukrainian soldiers were encircled and trapped for weeks in the Azovstal steelworks before they laid down their arms.

The SBU said video footage online showed the windows in some rooms survived intact, suggesting there had been an explosion inside rather than shelling from outside.

A spokesman for the Moscow-backed separatists told journalists that Ukraine had attacked the prison after the POWs had begun talking about crimes conducted by the Ukrainian military.

„The political leadership of Ukraine decided to use U.S.-producer multiple-launch rocket systems HIMARS to carry out a strike here to veil the crimes that the Ukrainian captives started talking about,“ spokesman Eduard Basturin said.

Reuters could not immediately verify the differing versions of events.

A U.S. official, speaking on condition of anonymity, said the United States did not yet have definitive information on what happened with the prison, but urged caution on what Russia was claiming given that past claims had proven to be false.

A Russian foreign ministry account of the U.S.-Russia phone call cited Lavrov as telling Blinken that Russia would achieve all the goals of its „special military operation“ and said Western arms supplies to Ukraine would only drag out the conflict and multiply casualties.

Blinken warned Lavrov about any Russian territorial claims during its war in Ukraine.

„The world will not recognise annexations. We will impose additional significant costs on Russia if it moves forward with its plans,“ he said.

Russia and Ukraine agreed last week to unblock grain exports from Black Sea ports, which have been threatened by Russian attacks since the invasion.

The deal was the first diplomatic breakthrough of the conflict but fierce fighting makes it extremely risky.

Ukrainian Infrastructure Minister Oleksandr Kubrakov told reporters in the southern port of Odesa that the country was ready to ship grain from two ports under the agreement but that no dates had been set.

He said he hoped the first ships could leave port before the end of the week.