A German court convicted a 97-year-old woman accessory to over 10,000 murders for her role as secretary to a Nazi SS commander stationed at a concentration camp in World War II.

The court’s Tuesday ruling found that Irmgard Furchner worked at the Stutthof concentration camp in what is now Poland, according to the Associated Press. Furcher argued she had no knowledge of the 10,505 murders that she was accused of being an accessory to. Prosecutors countered that the muster point for new arrivals to Stutthof was visible from her office window, and the crematoriums at the camp were running constantly during her time there.

Judge Dominik Gross found that it was „simply beyond all imagination“ that she was not aware of the murders going on at the camp.

Furchner was tried in juvenile court, given that she was 18 and 19 during her time at the camp. She was given a two-year suspended sentence, according to the AP.

Furchner reportedly attempted to skip her first hearing related to the trial, leading authorities to detain her. She said she was „sorry“ for her actions during her sentencing.

Efraim Zuroff, one of Germany’s top Nazi hunters argued the sentence was as good as could be expected.

„In view of Furchner’s recent statement to the court that she ‘regretted everything,’ we were concerned that the court might accept her defense attorney’s plea for an acquittal,“ Zuroff told the AP. „Yet given her claim that she had no knowledge of the murders being committed in the camp, her regret was far from convincing.“

The number of remaining Nazis and Nazi collaborators is dwindling in Germany as more than 75 years have passed since the end of World War II. Nevertheless, German prosecutors say they have pending cases against five other individuals.

This undated file photo shows a roll call, in the early morning or late evening hours, on the roll call square in front of the camp gate of the Nazi concentration camp Sachsenhausen in Oranienburg on the outskirts of Berlin, Germany. (AP Photo, file)

Furchner’s conviction comes more than a year after Germany tried and convicted a former Nazi guard in 2021. The man’s name was not released, but he was 100 years old at the time of his conviction.

The man was charged with 3,518 counts of accessory to murder for working as a guard at the Sachsenhausen camp between 1942 and 1945. 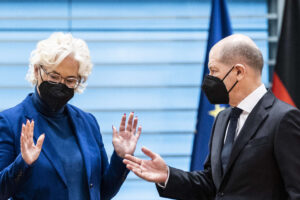