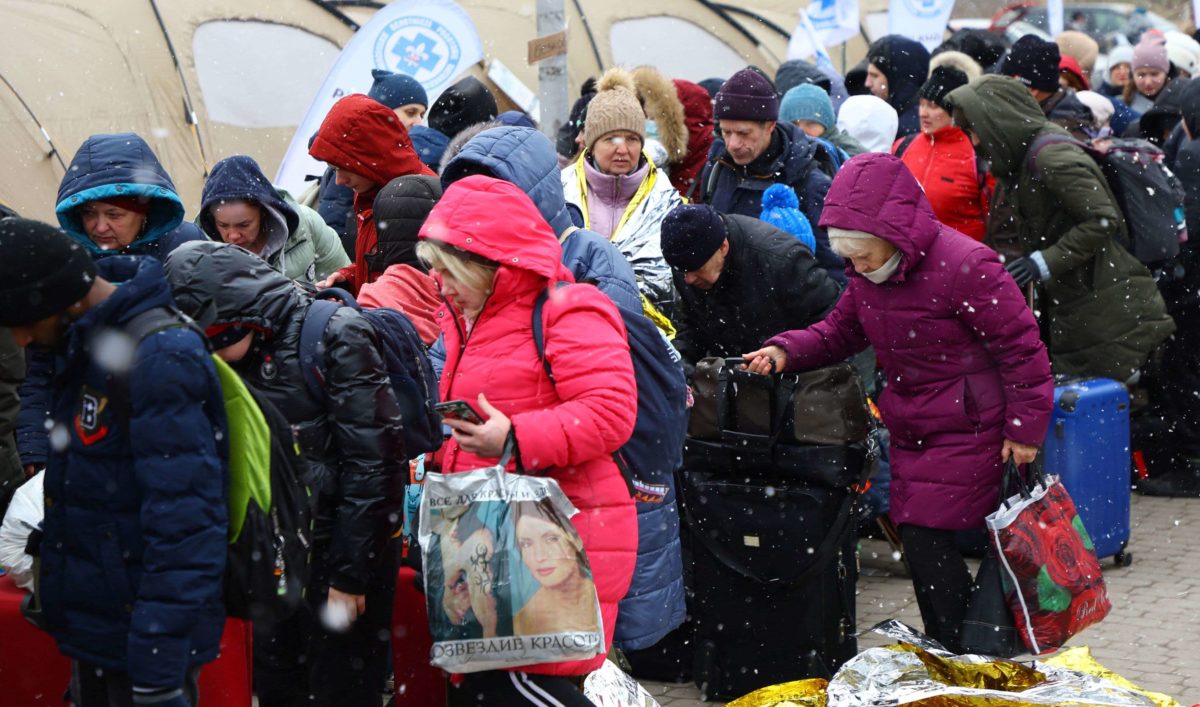 Many people have fled the war in Ukraine and headed to Germany, while more asylum-seekers are arriving from other regions via southeastern Europe. Local authorities are feeling overwhelmed and are sounding the alarm.

A bitter wind blows across the empty sports fields on the road out of Herzogenrath-Merkstein, a small community in the far west of Germany. A couple of brown leaves whirl over the green grass of the soccer field; the red-colored sand of the running track is wet. On the once-white plaster of the gymnasium, someone has written “SVS Merkstein,” the name of the local sports club, in black paint.

But no sports activities are taking place here at present. Instead, the hall is being used to house refugees from the war in Ukraine. In early August, partitions were used to set up temporary accommodation for 80 people. Now the space is full — as are all the other accommodation facilities for refugees in Herzogenrath.

About a kilometer down the road from the hall, the refugee advice team sits together for a meeting at the Protestant parish of Lydia. Pastor Frank Ungerathen has just told his colleagues that a second gymnasium will be converted this week. He learned this from the city’s social welfare office, which is responsible for taking in and caring for the refugees.

He and his team had hoped that the situation would not again reach the point it did during the refugee crisis of 2015/2016 when people also had to be accommodated in gym halls and even tents. But there is simply no more housing available in the small city of about 50,000 residents.

“The housing market has totally dried up,” said Mahkameh Robatian, who leads the advice center. Private offers to take in refugees are also rare. “The high prices of gas and electricity mean that people often decline because it becomes too expensive for them,” according to volunteer Olga Meier.

Since Russia invaded Ukraine and the first refugees from the war arrived in Germany, the advice center has been working nonstop: Its staff hold talks, make phone calls to authorities, help fill out forms, organize language courses, look for apartments and arrange cooking classes and meetings over coffee and cake. They encourage, advise, comfort, and, when necessary, also look after children.

A city like Herzogenrath normally received about 50-60 new refugees per year, estimated the pastor. “Now, 400 war refugees from Ukraine arrived in the space of three months — and we currently have 530.” In addition, about 850 people who fled from 20 other countries have also arrived. “Some have found jobs in the meantime, many have not — and the need for integration does not stop there.” The municipality cannot cope with this on its own.

In Aachen, 20 kilometers (12 miles) away, the situation looks no better. At the start of August, Mayor Sibylle Keupen pulled the emergency brake and announced that the city would not accept any more war refugees or asylum-seekers for the time being. All emergency accommodation centers were full, including eight gym halls.

Most of the more than 4,000 Ukrainian refugees who are registered in Aachen and receive financial support have found accommodation privately. This is also because Aachen already had a relatively large Ukrainian community before the war.

It is mostly people from African countries, along with a few Syrians and a handful of Ukrainians, who live in a “container village” made of prefabricated buildings that were set up on a former sports ground in the city’s south in 2016. The small rooms, each with their own cooking facilities, showers and toilets, are in hot demand because they offer privacy. Up to 120 people can live there, but a third of the containers are currently leaking and therefore uninhabitable. Attempts are underway to repair them.

The city authorities in Aachen are working flat out to convert vacant commercial properties into accommodation. The plan is that the refugees should have moved out of the gyms by the end of the German autumn.

“We are now in a situation where we realize this war will probably go on for a long time yet —  the people will stay here, and they need something other than a sports hall,” Sibylle Keupen said, adding: “These are families, these are different ethnic groups, different age groups, who all clash together there — that is also an explosive social force that we must moderate. That is very difficult if we do not have more small-scale accommodation options.”

The mayor supports the demand from the Association of German Cities and German County Association, which represent the interests of city and district authorities, for a refugee summit. The federal government must better control the distribution of people across the country, as well as step in financially, she believes.

“We need an orderly system to really provide people with — and this is the important thing for me — not just a roof over their head and a bed, but more. They need a place at school, or day care: they also need psychosocial care, especially when it comes to families and children who are dealing with war-related trauma.”

These are all things that throughout Germany are just as hard to come by as an available apartment — for which the refugees are competing with the rest of the population.

“Most landlords say no straight away, or hang up when they hear about refugees,” Michaela Lee, who is responsible for administration at the refugee help center in Herzogenrath, said. “I am always so glad when I manage to find an apartment for a refugee,” she added. “Or an apprenticeship, after I have helped write hundreds of applications.” That is her motivation.