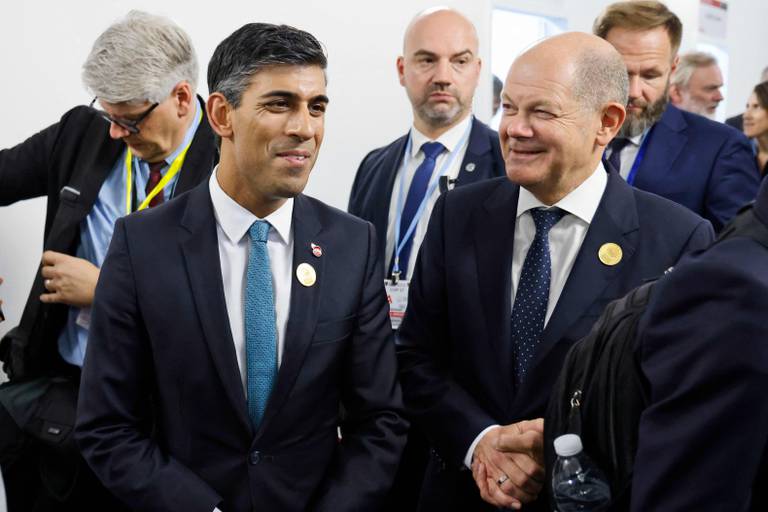 Britain and Germany will look to relaunch post-Brexit ties on Friday with a first strategic dialogue in London.

UK-EU friction over Northern Ireland will hang over the talks between Britain’s Foreign Secretary James Cleverly and his visiting German counterpart Annalena Baerbock.

But there are hopes that the mood in UK-EU relations is improving about three years after Britain left the bloc.

Ms Baerbock said the talks would look at restoring opportunities for workers and young people that were called into question by Brexit.

She and Mr Cleverly were expected to discuss co-operation on energy and climate change, as well as the war in Ukraine and cultural links.

It is the first round of annual strategy talks envisaged by a joint declaration between London and Berlin last year.

“It will be a good day for British-German co-operation,” German ambassador in London Miguel Berger said.

Ms Baerbock’s visit was delayed repeatedly by turbulence in British politics that resulted in two prime ministers, Boris Johnson and Liz Truss, being ousted in 105 days.

Britain’s participation in the new pan-European Political Community was also taken as a good sign and was cheered by French President Emmanuel Macron.

However, the Northern Ireland issue is yet to be solved and Ms Baerbock warned that peace on the island should not be put at risk.

“Exactly that is in danger of happening through Brexit and its consequences for trade, free movement and other issues,” she said.

“That is why all of us, in EU member states and the UK, have a responsibility to preserve and implement the Northern Ireland protocol.”

Ms Baerbock was in Ireland on Thursday where she said there was a “window of opportunity” to strike a deal.

The protocol is deeply unpopular among Northern Irish unionists who say it cuts ties between the province and the British mainland.

The UK has threatened to override the protocol, causing outrage in Brussels, if the EU does not loosen checks on Irish Sea trade.

Mr Cleverly says his preference is for a negotiated solution and said last month that the “mood music” between officials had improved.

Meanwhile, Mr Berger said last week that he was cautiously optimistic about a deal on Northern Ireland.

He suggested the war in Ukraine had opened eyes in the UK and EU on the need to work together.

Germany and Britain have largely aligned on Ukraine, although Mr Johnson recently raised eyebrows by questioning Berlin’s early stance on the war.

A spokesman for Chancellor Olaf Scholz issued a strongly-worded rebuttal to Mr Johnson’s claim that Germany considered it as “better for the whole thing to be over quickly”.

“We know that the very entertaining former prime minister always has a unique relationship with the truth. This case is no exception,” said the spokesman, Steffen Hebestreit.

Who are the Reichsbuerger behind Germany’s far-right coup plot?
Kazakhstan strengthens ties with neighboring leaders