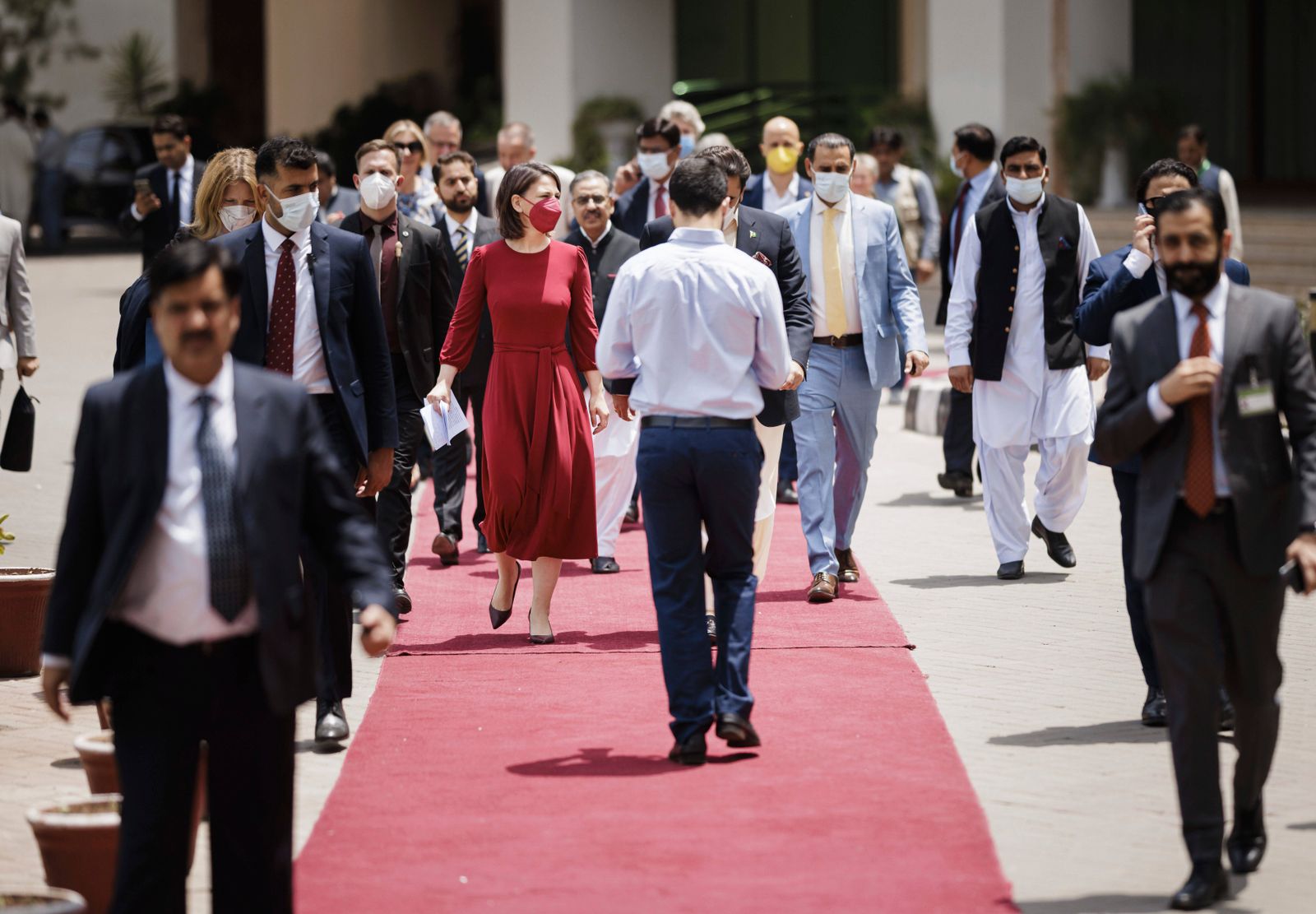 German broadcaster Deutsche Welle (DW) quoted a foreign office spokesman as saying Baerbock — who was due to travel onwards to Greece and Turkey — tested positive shortly after the start of her visit.

The German minister tested positive after lunch after noticing that she had lost her sense of taste, the report said, adding that a rapid antigen test she took in the morning had been negative.

„Building on our excellent talks today, I look forward to our continued engagement and future interactions to further solidify [our] partnership,“ he said.

Earlier today, the German minister called on the international community to „give a loud and clear message“ to the Afghan Taliban that they were „heading in the wrong direction“.

At a media conference in Islamabad alongside FM Bilawal, the German diplomat warned of the humanitarian crisis brewing in Afghanistan under the Taliban rulers.

„When we look across the border, the situation is dire and the Taliban are taking the country to a downfall,“ she underlined. „Parents don’t know how to feed their children, girls are deprived of rights to education, women have been shunned from the society, dissenting voices are suppressed and the economy is rendering to a halt.

„The international community must stand united and tell the Taliban loud and clear that you are heading in the wrong direction. And as long as they go down this path, there is no room for normalisation and even recognition of Taliban as legitimate rulers,“ Baerbock asserted.

But at the same time, she continued, Germany would not forget or abandon the people of Afghanistan. „It is not the mistake of the people that the Taliban overthrew the government and since then have tightened their grip on Afghan society,“ she said, promising that Germany would continue to provide humanitarian aid and support the people who need it, especially women and girls.

The diplomat highlighted that Pakistan had been Germany’s „closest and most reliable partner“ in that regard, revealing that under this close cooperation between the two countries, 14,000 Afghans, who were at risk in the country, could travel to Germany via Pakistan and were able to start a new life in safety and without fear.

Meanwhile, FM Bilawal urged the international community to respond to the „grave humanitarian situation“ in the neighbouring country which had put the lives of 40 million Afghans at risk.

„Pakistan’s policy is clear. We support a peaceful and prosperous Afghanistan which contributed to regional connectivity and stability,“ he said. „It is our hope that the Afghan authorities will be responsive to the expectations of the international community including inclusivity, respect, human rights for all including women and take effective actions against terrorism.“

The foreign minister stressed that, for its part, the world should actively engage in preventing the humanitarian crisis and release Afghan assets as it was crucial for stabilising the economy and making it sustainable.

He also highlighted that Pakistan was playing an outside role in mitigating the economic crisis in Afghanistan. „This is the face of Pakistan … A modern Muslim country.“

While talking about the Ukraine crisis, Bilawal maintained that Pakistan „does not want to be dragged in conflict particularly given that we have just experienced decade after decade of conflict in Afghanistan“.

„Ever since the Ukraine conflict started, we have been in regular contact with the leadership of Ukraine and Russia, as well as the European Union and other countries urging them towards continued dialogue and diplomacy in the pursuit of peace [ in Ukraine],“ he said.

„We once again, emphasise the indispensability of the immediate suspension of hostilities in the region and constructive engagement. Pakistan hopes a solution will be found through dialogue soon,“ Bilawal hoped.

On the other hand, Germany’s Baerbock said that Russia’s war had set dangerous precedents for the world and urged the global community to stand by Ukraine and defend its integrity through words and actions.

She pointed out that Russia’s restrictions on wheat exports and its capture of Ukrainian stocks had sent global food prices sky-rocketing and putting the livelihoods of countries dependent on wheat imports at risk of a food crisis.

Both foreign ministers expressed grave concern over the deteriorating climate conditions of the world.

„When it comes to the climate crisis, we are all living in the same house and the roof is already on fire. We are running out of time and have now to act,“ the German diplomat highlighted.

She recalled that last year Germany and Pakistan had established a joint climate and energy partnership. „We want to build on this partnership, move forward with the energy transition and lift our bilateral climatic relations to the next level.“

Furthermore, the leaders discussed opportunities for increased trade and investment partly in the fields of renewable energy. They expressed confidence that successful economic integration depended on common values and standards.

„In the face of these multiple crises, we only have a chance to fight if we exchange ideas, discuss openly and frank and cooperate closely. I am optimistic that our meeting today has laid the groundwork for our cooperation in the future,“ FM Baerbock added.