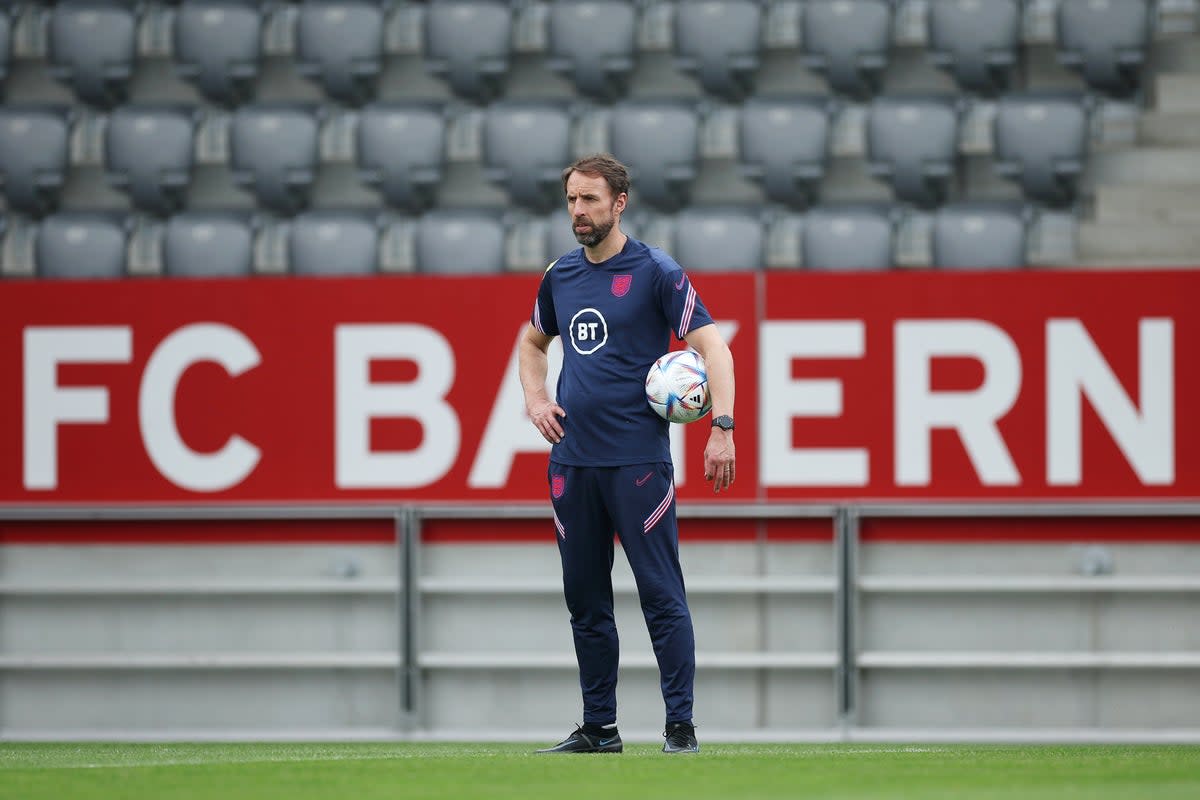 Hansi Flick’s Germany showed flashes of what they’re capable of, but ultimately failed to hold on for a 1-0 victory, as a win against a top nation still eludes them under Flick.

Germany started their Nations League match with energy and zip, creating a flurry of chances in front of a lively sell-out crowd, who erupted when Jonas Hofmann’s repaid Flick’s faith in him to open the scoring.

England’s Harry Kane, left, as both teams took a knee before kickoff.

But Germany couldn’t get their first win against quality opposition, with Germany having now scored three 1-1 draws, also previously against the Netherlands and Italy.

This time around a late Harry Kane penalty – won after a tangle between him and Nico Schlotterbeck – arrowed past Manuel Neuer. It was the England captain’s 50th goal for his country.

„The way we played today is exactly how we want to and it is great to watch for the fans too,“ Flick said after the game. „It’s a shame we couldn’t get the result though and that the penalty cost us the win.“

Munich’s Allianz Arena provided an imposing backdrop to this storied clash. It was a warm and friendly atmosphere as the rivals locked horns for a 34th time and the hosts took the knee alongside the Three Lions ahead of kick off.

Germany also wore the women’s national team kit in a show of unity ahead of the women’s Euros this summer in England. The stadium was lit up in rainbow colors too, in support of LGBTQ rights.

Only Neuer, Antonio Rüdiger, Joshua Kimmich, and Thomas Müller kept their spots as Flick reshuffled the deck following the disappointing draw away to a second-string Italy side. It was a much livelier start on a night where several players had a point to prove, with few positions left in which Flick does not have a standout candidate.

Kai Havertz, playing as number nine, and Ilkay Gündogan, who replaced Leon Goretzka in midfield, stand the biggest chance of still claiming a starting spot ahead of Qatar – with Flick praising Havertz’s improvement under Thomas Tuchel at Chelsea.

„Kai Havertz played three different positions today,“ Flick said. „You see what an amazing player he is. Under Thomas Tuchel he has made amazing improvements and also has grown physically in the Premier League.“

Meanwhile, Gündogan did exactly what Hansi Flick had expected him to do. In his prematch comments, the coach lauded the City player saying „he showed after his substitution (in the Italy match) that he brings a calmness to the game that was really good for us. I appreciate him as a person and a player.“

That calmness was on show against England, as Gündogan put in a composed passing performance. Breaking up the Bayern duo of Kimmich and Goretzka in Flick’s 4-2-3-1 has seemed unlikely given a recent vote of confidence from their coach. But this performance threw that into doubt, with Gündogan’s silk complimenting Kimmich’s steel to great effect.

Of the players on the periphery, it was the goalscorer Hofmann who did the most to convince his coach. Having come on as right-back against Italy and playing further forward on that flank against England, Hofmann was the most lively attacker until his substitution. While not a regular starter, the Gladbacher boasts the versatility to offer Flick options in Qatar.

Last time the sides met in Munich back in 2001 it ended 5-1 in England’s favor. The most recent clash between the sides was also Germany’s last loss. It saw England win 2-0 at Euro 2020 in the last 16, which ended Joachim Low’s reign.

Flick was always the logical candidate to replace him. Tasked with replicating his Bayern success and clearly defining Germany’s style on and off the ball, he convinced early with attacking football and eight straight wins but has fallen short in recent games.

The major fault in Munich was the failure to score more, as the hosts had plenty of chances to put the game to bed. However, this performance showed a glimpse of the exciting brand of Flick football so many had hoped for and demonstrated the depth at his disposal, as he aims to restore Germany to former glories.